As the pillar of the Imperial Capital defense, catch the truth of this local fighter that Japan is proud of!

The Raiden was a point defence fighter optimised to improve overall fighting performance, endurance and fire power. So what was the solution adapted by the designer, Horikoshi, to the Navy's demands for better performance while retaining a large-diameter engine? It was all down to the external design of the airframe, which was streamlined and ultimately allowed a better climbing performance than opposing fighter, despite its less powerful engine. This high-performance machine was born with a full Japanese intensity of feeling! The truth of its design will now be revealed through this latest thoroughly researched SWS kit.

Finally, the ultimate Raiden! Witness the truth of the proud interceptor, the last line of defense for the imperial capital! The Raiden was an interceptor designed to prioritize climbing performance and firepower at the expense of flight range and dog-fight capabilities. What was the solution that Dr. Horikoshi adopted to solve the enigma that arose from the Navy demanding a high speed interceptor while also incorporating the un-aero dynamic large diameter engine? As for the structural design of the shell, Dr. Horikoshi had extended the nose so as to reduce air resistance by creating a smooth streamlining form. He sought to surpass the climb performance of enemy aircraft by reducing the weight of the Raiden as much as possible. Such innovations can be said to be specific to the Japanese, and as a result this infamous plane was born. Every aspect of this aircraft shall be revealed through the SWS kit, developed as a result of exhaustive research and tireless development. 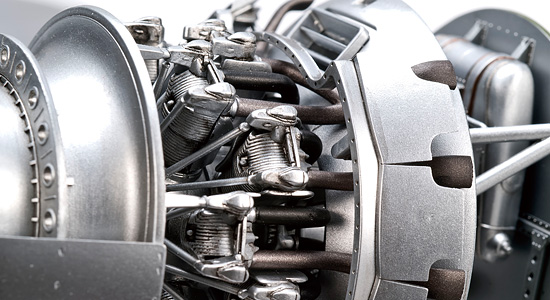 Pay attention to the powerful Mitsubishi "Kasei 23a engine"! The powerful Mitsubishi "Kasei 23a engine" lies at the base of the spindle shaped fuselage; detailed characteristics of the engine, including the extension drive shaft and cooling fan are all recreated in great detail! Please thoroughly enjoy the structural composition of a real airplane; for it is only available with the SWS kits. Can you see the baffle plates that run along the sides of each cylinder? The function of this essential part is to divert the heat from the front line of cylinders and increase the cooling efficiency of the back line cylinders in this radial-shaped, air-cooled engine. The baffle plates don't stand out, but SWS kits have never failed to recreate these parts with any of their releases. 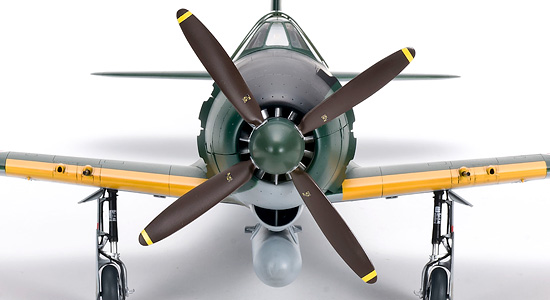 When one thinks of the Raiden, the notion that comes to mind is "the defense of the Imperial Capital." It stood courageously as it was deployed to defend our nation's capital. Complete with its wide blade propellers, designed to fly at ultra-high altitudes, this SWS kit was made possible by exhaustively researching the last remaining aircraft of its species. 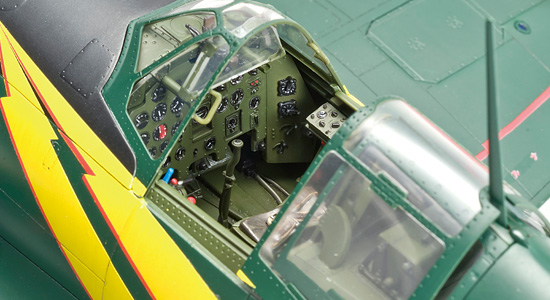 The model is conveniently designed such that the assembly work-load is reduced by the unification of the instruments and chords that are integrated into the ribs at the sides of the cockpit. One can almost imagine the feelings of the pilots of that time when looking at the operating mechanisms condensed and recreated at 1/32 of the original size. 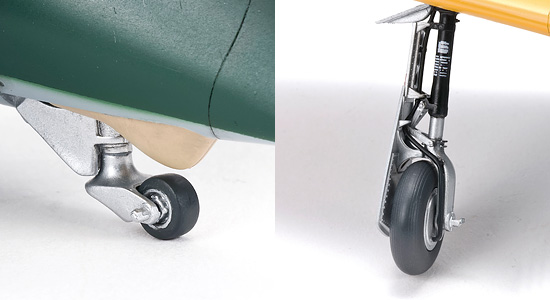 The landing gears that supported the Raiden, powered by the powerful Kasei engine, would withstand taking off from even the most uneven grounds at full speed. It would charge at full throttle straight toward enemy bombers. Unlike most other Japanese aircraft, the landing gear mechanism was powered by electricity.It is a mark of SWS kits that one is able to observe even the minutest details of an aircraft's structural design. Another mark of the SWS kit is the thoughtful design in which all one needs to do is to fit the landing gear piece into the fuselage to have it assume landing position at the correct angle! 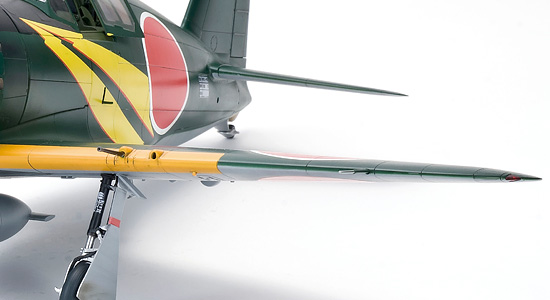 When one observes the wings designed by Dr. Horikoshi, one can see a "bend" in the angle toward the front edge. When seen from the front, one sees a beautiful curve reminiscent of that of the Zero. Such detailed designs were typical to Japanese aircraft of the time. 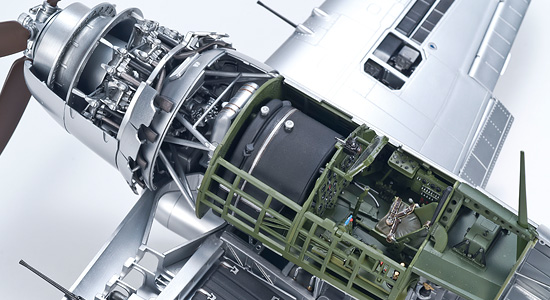 For the first time ever the details of the internal structure of the Raiden, the supreme interceptor of Imperial Japan, are thoroughly recreated through exhaustive research performed on the last remaining Raiden at the Planes of Fame Museum in Chino, USA. We have renewed almost every aspect of the die cast in order to recreate the SWS kit as realistically as possible!

Most of the significant components and mechanisms are fitted into the front half of the spindle shaped fuselage. We hope you take note of and appreciate the roomy cockpit and various control rods that run along the nearly empty rear half of the fuselage as well. 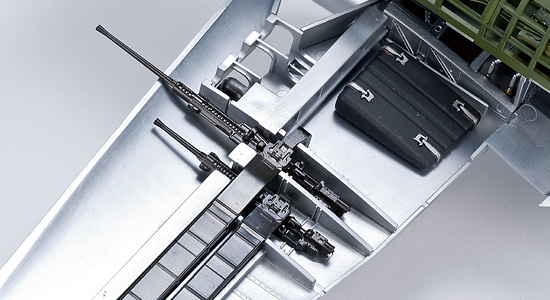 Since the Raiden Type-21 was a high altitude interceptor, it was fitted with four 20 mm machine guns to perform devastating hit and runs against invading enemy bombers.Of the two sets of guns on each wing, the Type 99-2 model 4 20mm complete with 210 rounds in the magazine were mounted on the inner side, and the Type 99-1 model 4 20mm gun was mounted on the outside with a 190 round magazine.

It goes without saying that the shell of the aircraft was designed for the purpose of flight. All aspects of the exterior design are the products of this basic purpose and the necessities that arise from the aircraft's internal structure.This kit magnificently recreates the spindle shaped shell specific to the Raiden.It successfully recreates the engine cowls that contain the extension shaft, the lines of the "inflated" lower fuselage, the curves of the rounded upper fuselage that extends from the canopy to the empennage, and the uniquely large fillet portion.