Fans of German aircraft rejoice! The "Flying Can Opener" has arrived at last!!

The Hs 129, feared as the "flying can opener" by the Allied soldiers, will finally be released as an impressive SWS kit in 1/32 scale!

1. The true essence of "Tank Buster," revealed by SWS.
The Henschel Hs 129 was mounted with powerful ground-attack weapons to destroy Soviet tanks in the Second World War. Designed specifically for ground attacks and known to be easy to service, the Hs 129 earned a high level of trust from its pilots. This kit brings you all the details of the structure and it function in a way that only heavily-researched SWS kits can.

2. Developed to be a heavily-armed ground-attack aircraft, the Hs 129’s standard armament consisted of two 20 mm MG 151 machine guns behind the cockpit and two 7.92 mm MG 17 machine guns mounted in the wing roots.
The underside of the fuselage could be equipped with various types of explosives or heavy-caliber weapons. This kit enables the replication of the Hs 129 B-2/RIII armed with a 30 mm MK 101 cannon and its 30-round drum magazine.

3. The Hs 129 was designed to be a compactly-sized ground-attack aircraft.
In particular, the B and later versions had a trapezoidal fuselage with straight wings, a textbook example of simplistic, sturdy design. With its closely-situated engine nacelles and cowlings, once can truly appreciate its functional beauty as a small twin-engine aircraft. This SWS kit pushes the limits to thoroughly replicate that functional beauty as a “miniature version of the real aircraft.” 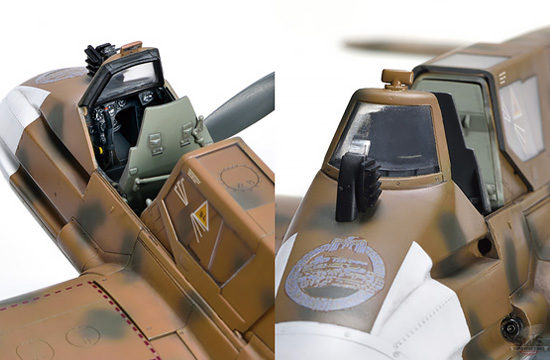 The Hs 129’s trapezoidal cockpit was extremely cramped due to its narrow frame. The instrument panel was reduced to only the most vital elements and the gun sight was mounted on the top of the nose outside of the cockpit. Some of the instruments were mounted to the inboard faces of the engine nacelles, like other German aircraft including the Bf 110 and Ju 88. The cockpit was encased in a sturdy fortress-like armored “bathtub” to protect the pilot from ground-based anti-aircraft gunning. The windscreen was made from multi-layer 75 mm-thick bullet-proof glass and the top 2/3 of the window was retractable to improve the ease of entering the cockpit. However, this essentially eliminated any rear visibility and greatly reduced the front visibility. The SWS kit replicates the subtle differences for the different armament versions, in additional to the shared instruments.The Hs 129’s engines reveal the true value of SWS kits; learning about the development concept and historical background as you build 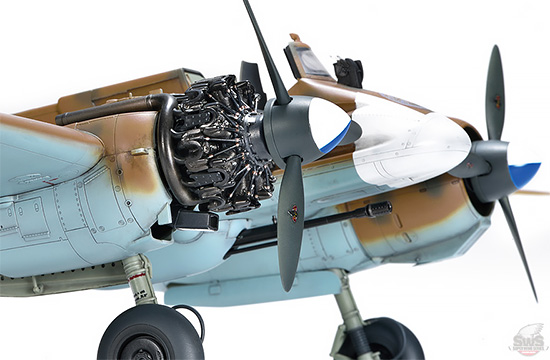 The Hs 129 was originally powered by the Argus As 410 engines, which had insufficient power. However, after Gnôme-Rhône 14M engine production in occupied France became a possibility, it was quickly decided that the Hs 129 was to be powered by those engines instead. The 14M engines still had insufficient power, but they were both more compact and performed better than the As 410 A engines. The variable-pitch Ratier 1527/1528 propellers were also produced in occupied France. Making use of the equipment that once belonged to an enemy country after occupation is a logical strategy that was made possible by the land connection of the European region. These propellers were also selected because while the German twin-engine aircraft engines rotated in the same direction together, French engines rotated in opposite directions for the left and right sides, so they were not interchangeable. Therefore, the aircraft used similarly French-made left-rotating and right-rotating propellers for each engine, respectively. This SWS kit brings you the full picture so that you can truly experience the development concept and historical background as you build.

Now this is a true “Tank Buster”! This kit includes every detail of the heavy armament of this ground-attack aircraft. 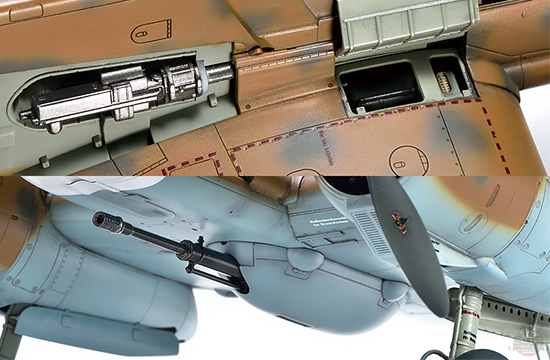 The Hs 129 was designed to be a heavily-armed ground-attack aircraft, and the standard armament consisted of two 20 mm MG 151 machine guns inside of the fuselage behind the cockpit and two 7.92 mm MG 17 machine guns mounted at the bases of the wings on both sides. The underside of the fuselage was designed to be interchangeably armed with various types of explosives or heavy-caliber weapons. It was possible to mount four ETC 50 racks for four SC 50 bombs or one ETC 250 rack for one SC 250 bomb to the undercarriage. ETC 50 racks could be attached to the undersides of the left and right outer wings, and one SC 50 bomb could be mounted to each side. This SWS kit replicates the Hs 129 B-2/RIII variation armed with the 30 mm MK 101 cannon with its 30-round drum magazine on top. Please enjoy the differences between each weapon and diverse armament varieties for each variation.

SWS faithfully replicates the sturdy wings and landing gear that could withstand many low-altitude ground attacks with heavy weapons. 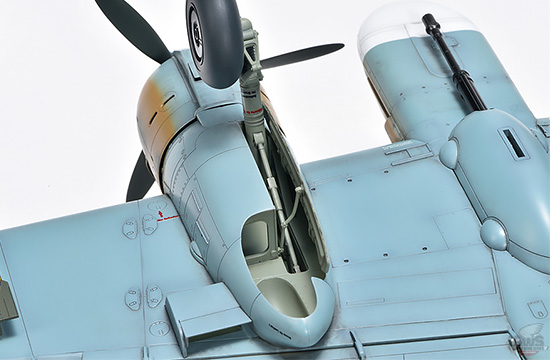 The Hs 129 wings were designed to be thick and strong, with a straight leading edge and a tapered trailing edge on the wing planform. The wing’s construction was divided between the inner wing up to the outside edge of the engine nacelles and the outer wing extending beyond. The inner wings stored one 205-liter fuel tank on the inner side of each wing, and the wing’s inboard armament was mounted near to the fuselage. Bombs could also be mounted underneath the outer wings. The main struts were hydraulically pulled back into the nacelles behind the engines. The structure supporting the axis of the main wheels was designed to also support the engine rack in the front. The tail wheel was not retractable, and it was left exposed during flight. This SWS kit faithfully replicates the dimensionality and density of the simple area around the landing gear, not missing any details to fully recreate the rugged yet beautiful wings. The parts were also carefully designed for ease of assembly.

The following SWS Detail Up Parts are available: